Florida gas prices have held relatively steady even after last week’s Colonial Pipeline outage led to a deluge of demand for gasoline. The state average price for gasoline is $2.89 per gallon. That’s 1-cent more than a week ago and 2 cents less than this year’s highest price of $2.91 per gallon, set back in March.

Florida filling stations are still recovering from surging demand last week. Gasoline sales were reportedly 2-3 times stronger than normal, as drivers lined up at pumps to top off their tanks. Although Tallahassee is the only major market directly serviced by the Colonial Pipeline, outages were reported at various filling stations throughout the state due to "panic buying".

"Unlike last week, fuel demand in Florida is now said to be lower than normal, because many Floridians went into the weekend with a full tank of gas," said Mark Jenkins, spokesman, AAA - The Auto Club Group. "The lower demand should give gas stations time to replenish their tanks. It’s likely that most Florida filling stations will have fuel again by the middle of the week."

Since Colonial Pipeline went offline, Tallahassee gas stations were supplemented by fuel deliveries that were driven over from Jacksonville. The good news is that the Bainbridge terminals are once again receiving gasoline from the Colonial Pipeline, which should help restore normal supply patterns for the Tallahassee market. Statewide, Florida ports continue receiving gasoline deliveries. Ninety percent of the state’s gasoline is delivered via cargo ships. 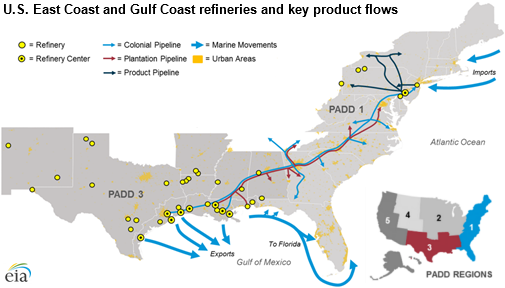 Gas Price Survey Methodology
AAA updates fuel price averages daily at www.GasPrices.AAA.com. Every day up to 130,000 stations are surveyed based on credit card swipes and direct feeds in cooperation with the Oil Price Information Service (OPIS) and Wright Express for unmatched statistical reliability. All average retail prices in this report are for a gallon of regular, unleaded gasoline.

The Auto Club Group (ACG) is the second largest AAA club in North America with more than 14 million members across 14 U.S. states, the province of Quebec and two U.S. territories. ACG and its affiliates provide members with roadside assistance, insurance products, banking and financial services, travel offerings and more. ACG belongs to the national AAA federation with more than 62 million members in the United States and Canada. AAA’s mission is to protect and advance freedom of mobility and improve traffic safety. For more information, get the AAA Mobile app, visit AAA.com, and follow us on Facebook, Twitter and LinkedIn.