How to Escape a Sinking or Burning Vehicle; Are Your Windows Unbreakable? 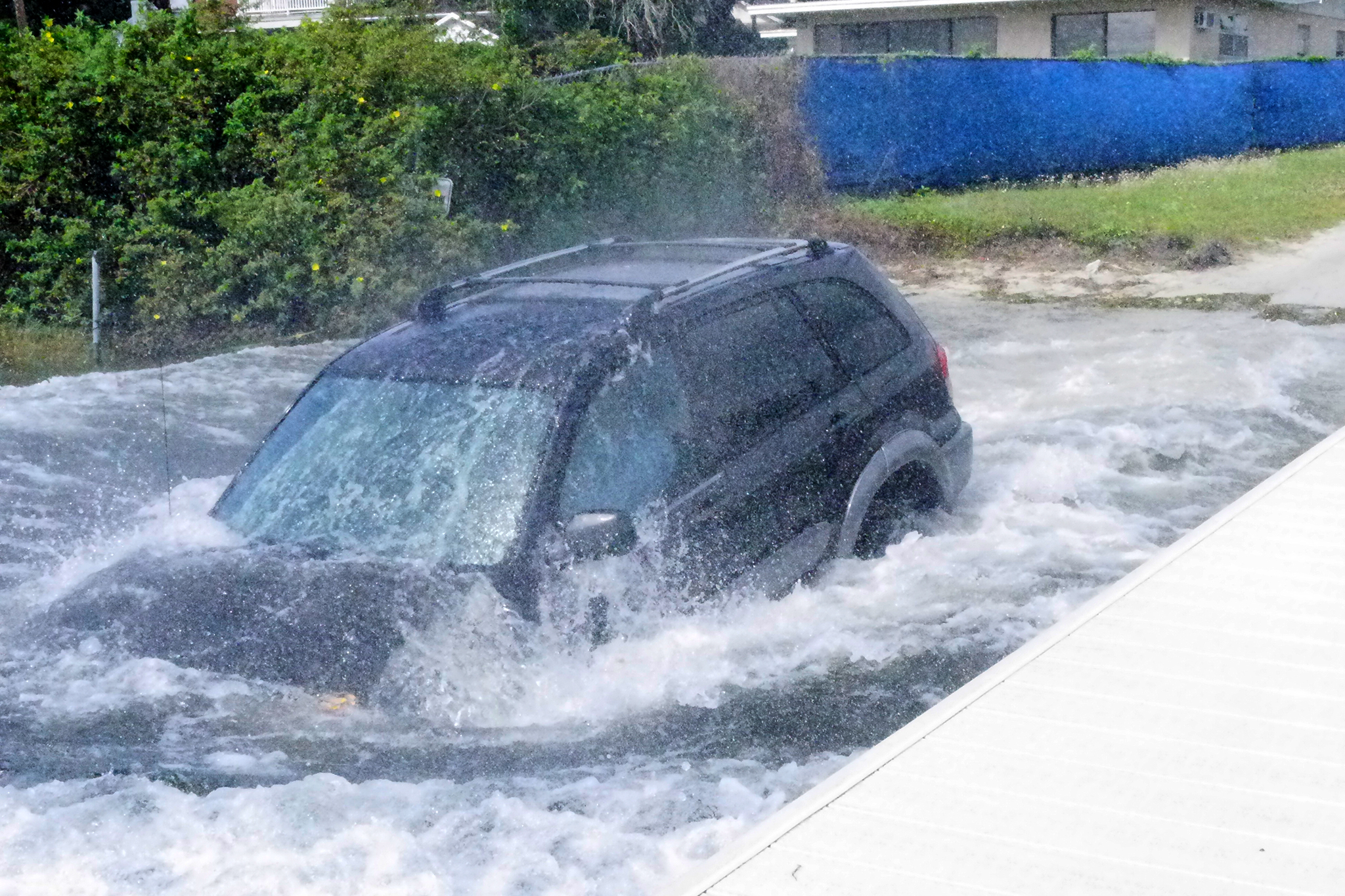 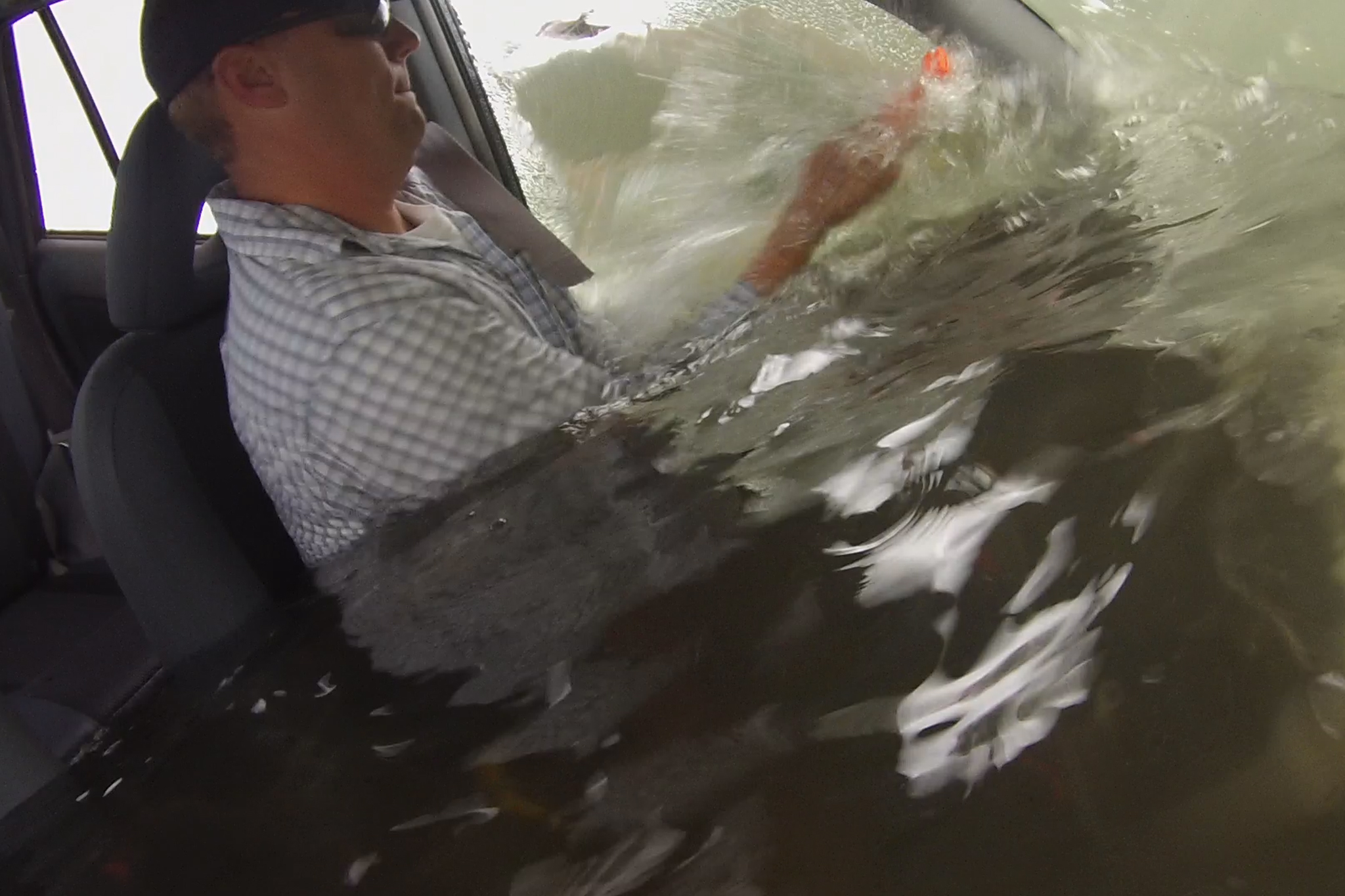 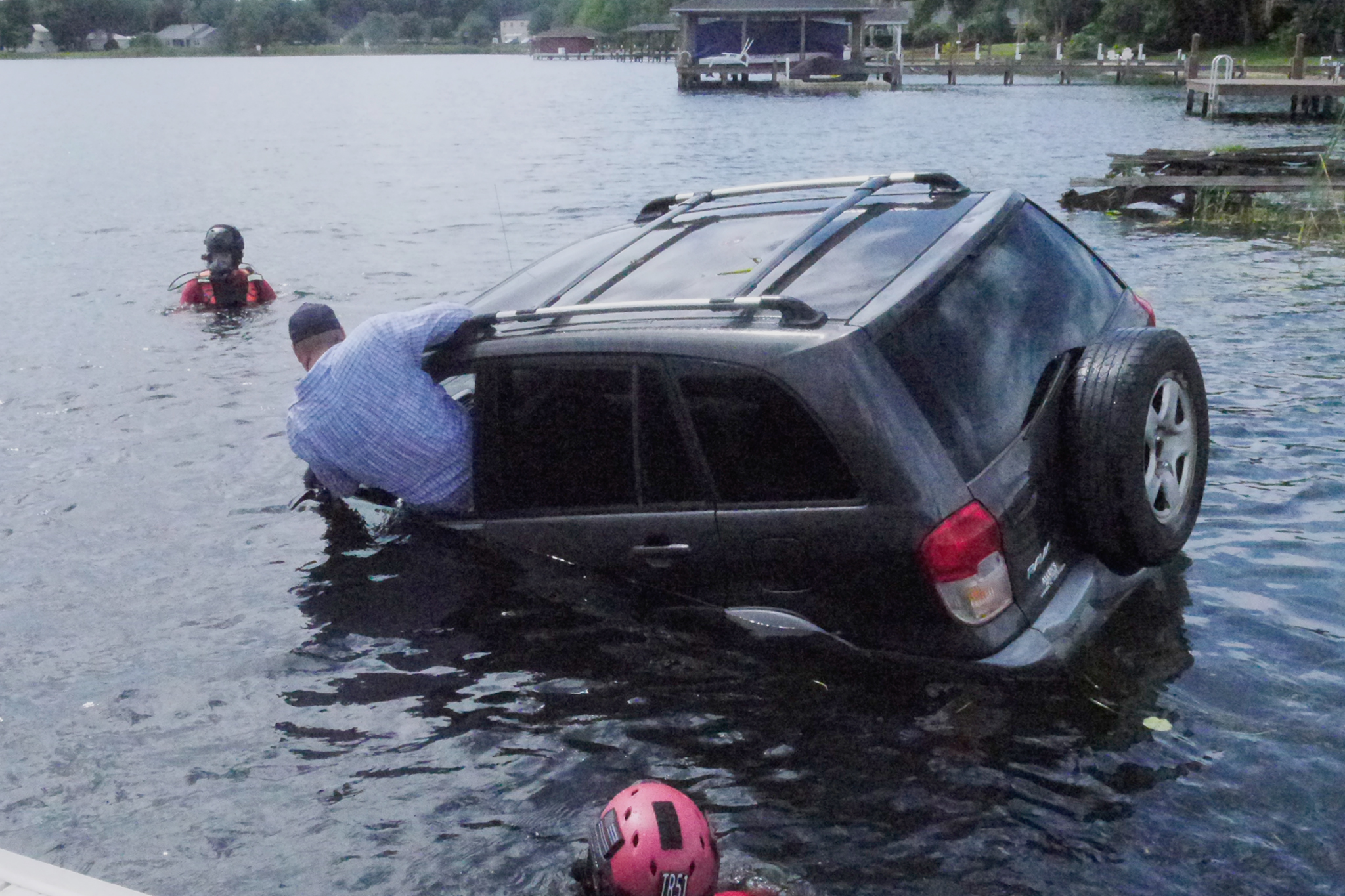 If your car crashes in the water, how do you escape? AAA tested six consumer tools designed to help drivers break their car window. Although most were effective on tempered glass, none shattered a type of window that is becoming more common in newer vehicles.

Compelling new video from AAA shows a trained professional drive his SUV into a lake.  He uses a spring-loaded escape tool to cut his seat belt, break his window, and escape his sinking vehicle. If his window was laminated glass, escape would not be so easy. On Monday, AAA allowed reporters to try breaking both the tempered and laminated glass. In this video, you see the durability of the laminated glass, even against the force of a hammer.

Read below for AAA’s formal study on vehicle escape tools and find out why laminated windows are becoming more prominent on U.S. roadways.

In 2017, there were an estimated 21,000 crashes in which the vehicle caught fire or became partially or fully submerged, resulting in 1,800 deaths. Based on these estimates, drivers experienced over 10 times the number of rollover crashes than those related to fire and submersion combined.

Escape tools are intended to aid occupants in an emergency by breaking through side windows to create a way to exit the vehicle. The majority of vehicle side windows are made from tempered glass, which shatters when broken. But an increasing number of vehicles are being built with laminated side window glass, which is nearly impossible to break. 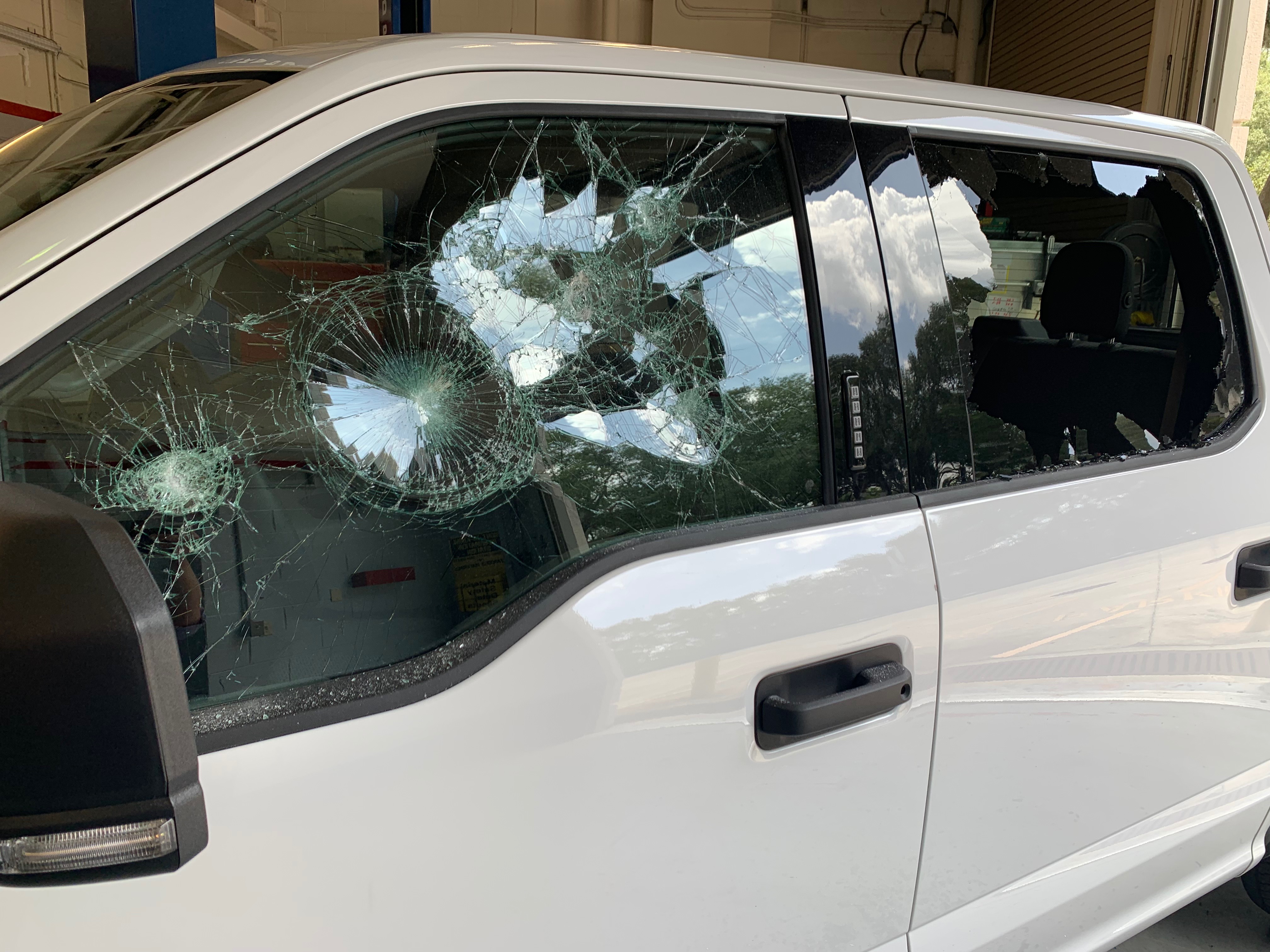 Drivers may not realize, one in three 2018 vehicle models have laminated side windows, a nearly unbreakable glass meant to lessen the chance of occupant ejection during a collision. AAA urges drivers to know what type of side window glass is installed on their vehicle, keep a secure and easily accessible escape tool in their car and have a backup plan in case an escape tool cannot be used or doesn’t work.

In its latest study, AAA examined a selection of vehicle escape tools available to consumers to determine their effectiveness in breaking tempered and laminated vehicle side windows.

“To improve safety, more vehicles are being equipped with laminated side windows – but a majority also have at least one window made of tempered glass,” said Mark Jenkins, spokesman, AAA - The Auto Club Group. “Our research found that generally vehicle escape tools can be effective in an emergency, but only if drivers know what type of side windows they have, otherwise they could waste precious seconds trying to break glass that will not shatter.”

What windows do you have? 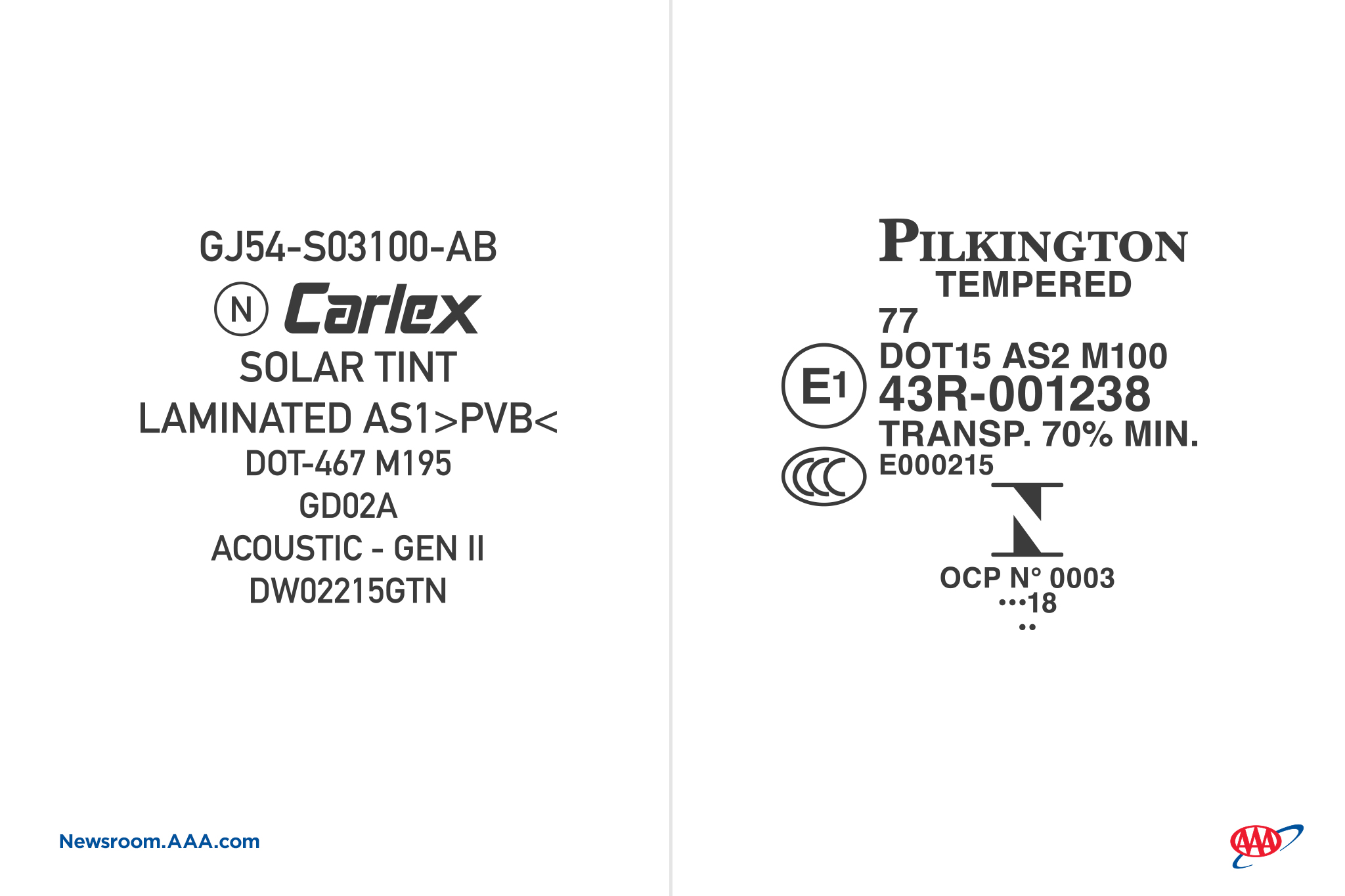 Drivers can determine the type of glass installed on their vehicle by first checking for a label located in the bottom corner of the side window, which should clearly indicate whether the glass is tempered or laminated. If this information is not included or there is no label at all, AAA advises contacting the vehicle manufacturer. It is also important to note that some vehicles are outfitted with different glass at varying locations in the car (i.e. tempered glass on rear side windows versus laminated on front side windows).

The increased use of laminated glass is in response to federal safety standards aimed at reducing occupant ejections in high speed collisions. In 2017, there were an estimated 21,400 people who were partially or fully ejected during a crash, resulting in 11,200 injuries and 5,053 deaths. While these types of crashes are more prevalent, there are instances where vehicles may catch fire or become partially or fully submerged in water, forcing drivers and their passengers to exit the vehicle through a side window. In situations like this, vehicle escape tools can assist ahead of emergency responders arriving.

Vehicle escape tools come in many varieties, but AAA suggests avoiding tools with extra features such as lights or chargers since these functions do not improve the performance of the tool itself. Drivers should also remember that in the event their vehicle is submerged, a hammer-style escape tool (as opposed to a spring-loaded-style) will be ineffective underwater, because it would be harder to swing. 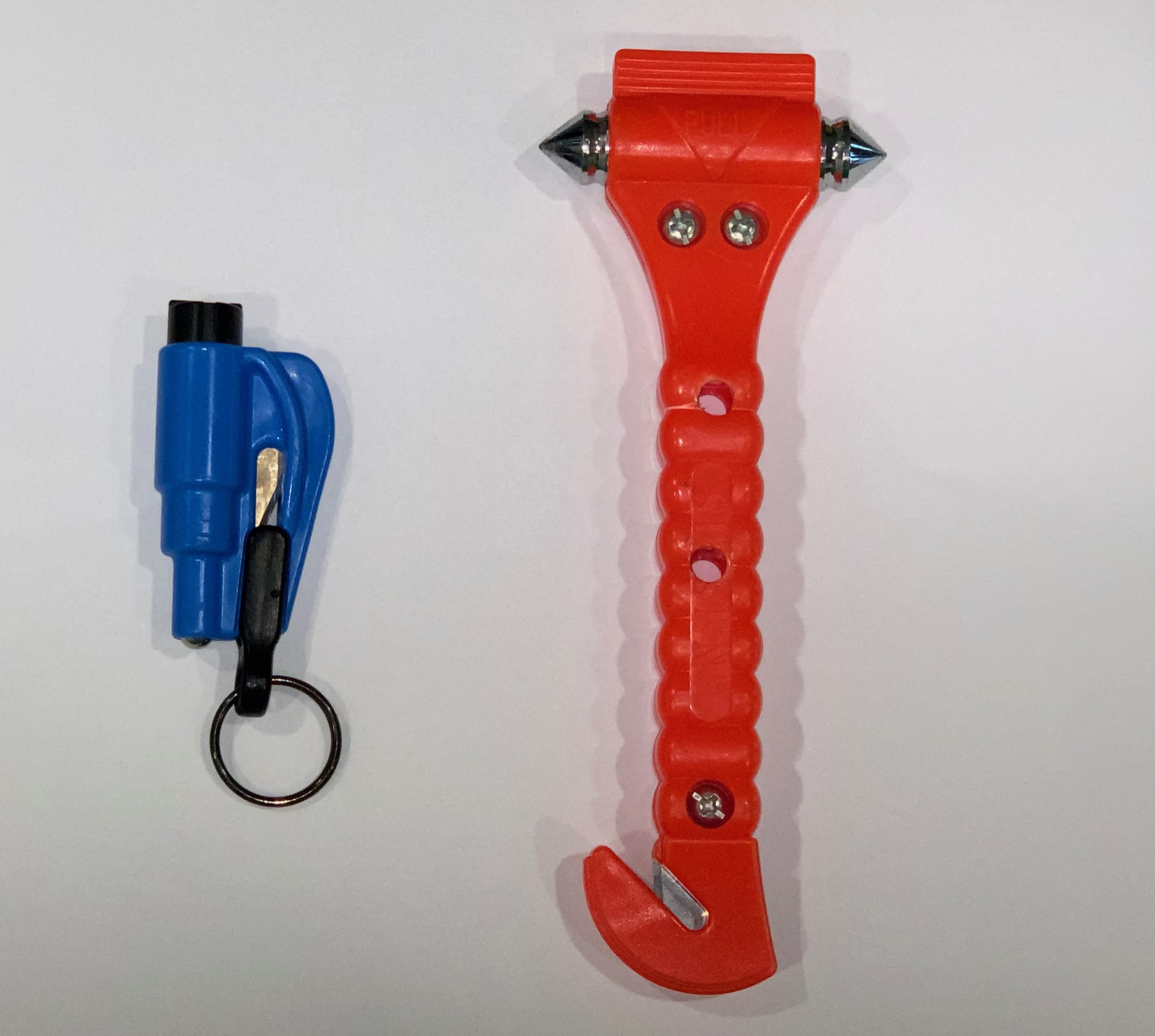 “Drivers should pick a tool they feel comfortable with and find easy to use, but most importantly they should store it somewhere that is secure and within reach following a collision,” added Jenkins.

Escape tools should be easy to access, even after a collision; therefore motorists should consider the location of the tool and how it is stored in the vehicle. Spring-loaded tools are often designed to be used as a key chain, which allows the tool to be attached to the ignition or to a purse or backpack. Some hammer tools come with a plastic housing that can be mounted in the vehicle. Drivers can even fasten the tool to the dash or steering column with a hook-and-loop fastener so that it stays in place during a collision.

Being prepared in an emergency can greatly improve the chances of survival, especially if drivers and their passengers have become trapped in the vehicle. AAA strongly recommends drivers do the following:

If trapped in a vehicle, remember there is a S-U-R-E way out:

For testing methodology, refer to the full report by clicking here.

About The Auto Club Group

The Auto Club Group (ACG) is the second largest AAA club in North America. ACG and its affiliates provide membership, insurance, financial services and travel offerings to over 9.9 million members across 11 states and two U.S. territories including Florida, Georgia, Iowa, Michigan, Nebraska, North Dakota, Tennessee, Wisconsin, Puerto Rico and the U.S. Virgin Islands; most of Illinois and Minnesota; and a portion of Indiana. ACG belongs to the national AAA federation with more than 59 million members in the United States and Canada and whose mission includes protecting and advancing freedom of mobility and improving traffic safety. Motorists can map a route, identify gas prices, find discounts, book a hotel, and access AAA roadside assistance with the AAA Mobile app for iPhone, iPad and Android. Learn more at AAA.com/mobile. Visit AAA on the Internet at AAA.com.